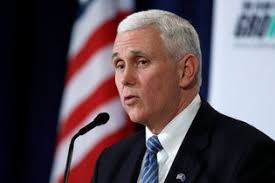 The blow-back from Indiana just keeps on giving Mike Pence a headache. What he perceived last Thursday as his time in the sun when with a smug smirk on his face he signed into law a bill that would allow businesses to discriminate against not only gays and lesbians but almost anyone as it turns out; turned out to be a downer for the governor who would be president. Now he isn’t concerned with the presidency anymore, but how he can extricate himself from his obviously ignorance of how the public would perceive his stroke of the pen signing of a law that he thought had been crafted so cleverly as to circumvent the pitfalls of the past and allow his base of wing-nuts a way to discriminate against the law of marriage equality.

Oh what a tangled web we weave when first we practice to deceive.

And now up steps the gaggle of geese that is the GOP presidential contenders for their party’s nomination in 2016 to defend Mikey after his having stepped into the manure pile big time. One might wonder if they are doing so with a sigh of relief that first it wasn’t them who drank the cool aid and two they are doing so to stifle their mirth at his misfortunate venture into the minefield of stupidity?

Clearly the smug Pence did not see the tsunami of outrage coming, especially from the Indiana business community or the national giants of industry and commerce weighing on the side of gays and lesbians. Whoa fellas what is that all about? I have sucked it up for you guys. Hey I am pro business. Hey why have thou forsaken me in my hour of greatest need?

Hey Pence money talks, and it can walk to another state if it decides you and your state leaders ain’t happening. And hey Mike it appears you ain’t happening at all. Oh but we didn’t really mean it. We were just kidding. This law’s not about discrimination it’s about love and religious freedom, except it ain’t! Mike suddenly is friends with John Lewis. And what does that have to do with the price of ignorance?

All across this land the message is clear discrimination cloaked as religious freedom is still discrimination and the American people are tired of it. Gay marriage rights are something whose time has come and we here in America are tired of people like you Mike passing laws that take away people’s rights and try to convince the public that what you are doing is not discrimination.

Smug as a bug in a rug you was and now you have a headache cause it’s been a rough week. So take an Excedrin and call us in the morning. And maybe if you do the right thing and do like the Indianapolis Star said on its front page today in BOLD PLAIN LANGUAGE AND FIX IT RIGHT NOW, we’ll take another look at you and see if you are a changed man or just another charlatan with a pretty face trying to be something you ain’t!

But Mike don’t hold your breath!